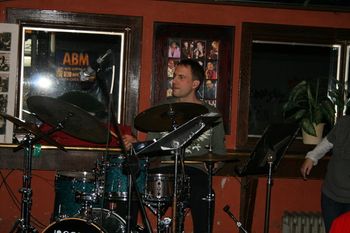 Ben Ball grew up in Sarnia, Ontario and began playing drums at age thirteen. At the age of seventeen he enrolled in Humber College and completed the Applied Music Program by the age of twenty. During his student sojourn, he became focused on Jazz music and after graduating from Humber, received a Canada Council project grant to study with Chris McCann in Kingston Ontario. After touring and playing at various jazz clubs around Toronto, Ben received another project grant from the Canada Council and decided to move to New York to pursue his interest in Jazz music.

During his two year stay in New York, Ben played at the 55 Bar, Sonny’s Place and many more venues. He worked with such musicians as Billy Mitchell, Kermit Driscoll, Joe Knight, Ken Hatfield, Carol Sudhalter and many others. During this time he got a call to play in South Korea. After playing for three years in Korea, Ben decided to study further and enrolled in the University of Toronto Jazz Bachelor Program. He graduated in 2001 and then proceeded to study and get his Bachelor of Education from O.I.S.E. at the University of Toronto.

Upon completing his studies at the University of Toronto, Ben accepted a fulltime contract-based teaching position in the Applied Music Department of PaekChe Institute of the Arts in South Korea. While in Korea, Ben worked with many visiting musicians including: Kirk Macdonald, Lorne Lofsky, John Patitucci, Brian Dickinson, Ted Quinlan, Mike Downes, Jae Chung, Kenji Omae and many others.